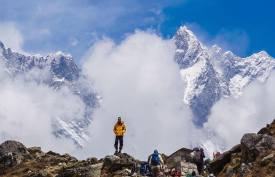 High pass treks in Nepal are not famous because of thrill but also will give an advantage to the adventure to explore the different culture, Village, Lifestyle, Enjoyment of watching same Himalayas from different prospective.

Here we are talking about most famous high pass treks in Nepal.

Annapurna Circuit trek is one of most famous high pass treks of Nepal. In earlier days Annapurna Circuit trek need 21 days to finish but since the road has been built along the trek route and became a short distance of trekking route can finish 10 to 13 days, Normally this route start from Besishar which is around 180 KM driving distance from Kathmandu. Since the rough road has been built until Manang trekkers has an option either they can take a local transport or walk.

The most famous high Pass known as Thorang-la pass which is 5416 Meters high from the sea level is in this route. We do not need special crampons and ice axe to pass this trail.  Normal time to pass the throng-la is about 8 hours from high camp to Muktinath. Again trekkers has an option to take a local transport back to Pokhara or can also take adventure walk to Pokhra via Tato pani (Natural hot spring ) which also one of the highlight of Annapurna circuit trek. Trek to poon hill is an another option for the adventure lovers while doing the Annapurna Circuit trek. Starting from another side and finishing in another side is the great part of this trek as also known as one of the best loop trekking trails of Nepal. The ending part , The Pokhara City is another famous distention of which include in Annapurna Circuit trek trails at the end.

Cho-la pass trek can be done with two option, clock wise or anti clockwise. Clock wise route will take you the route with Cho-la pass first and Anti clock wise trek route takes to the trekkers first Everest base camp and than the trails will lead you to this adventure high pass Cho-la

The Height of this adventure Cho-la is pass is 5420 Meters high from the sea level and need approximately 8 hours from Dzongla to Thangna or Thangna to Dzongla. Ice axe and crampons are not required for this pass.

Exploring beauty of High Himalayas, Greatest views of the world highest mountain Mt. Everest from Kalapatthar can be a life time achievement. Learn about unique Sherpa culture, the rare Lifestyle of Sherpa people are also biggest highlights of this route.

Gokyo Cho-la pass trek trek highlights are not limited. The view of Himalayan lakes of Gokyo is   an extra ordinary and not comparable. Climbing Gokyo peak and view of Nogzumba glacier with Gokyo lake is speechless.

Since the Annapurna Circuit trek is destroying day by day with the construction of road building Manaslu circuit trek is getting popular day by day. Manaslu Circuit trek start from Aarughat which is 7 to 8 hours driving from Kathmandu. Instead of Driving Aarghat you can also drive to Soti Khola or Aarkhet.

The Trek route of Manaslu is remote and wilderness but gives you an excellent views each moment. The total trek need 14 to 16 days.  The Loop trek start from Manasalu conservation area and end at Annapurna Conservation Area. After the finish the Manaslu Corcuit trek, trekkers can continue their trek to Annapurna Circuit trek from Dharapani.

The High pass called Larkya-la is inside the Manslu Circuit trek which is about 5100 Meters high from the seal level and takes around 8 hours to cross larkya-laa pass. No special climbing skill needed as well as no needed  Ice axe crampons. During the Manaslu circuit trek, trekkers has option to do the trek into a newly open trekking route, Nar Phu and Tshum valley.  Special trekking permit is required for all these route and need to join with government registered trekking  company  of Nepal as well as require minimum two trekkers in a group size.

Ganja-la pass is 5130 meters high from sea level. The Ganga-la pass is remote pass as well as a bit  technical than the other normal pass. It is also recommended to the trekkers to hire a professional guide. Carry a crampons ice axe as well as rope can be also needed depend on the weather and season. The main Highlight if the adventure Ganja-la pass trek is Visit Tibetan village at Langtang , Amazing views of Langtang Ri, Ganesh Himal, Lang Sisa , Ascent of Chorkari Ri (5050m) Panoramic views of 10 peaks over 6000m, Spectacular views of the Ice fluted Gyanghempo as well as Crossing the Ganjala pass 5130 meters.

Upper Dolpo trek is one of the unique trekking in the world and is a challenging hiking experience. The upper Dolpo is lies in the far northern west part of Nepal. The Dolpo is the most beautiful region and less developed side of Nepal close to the Tibetan border. The Unique culture of Dolpo is really mysterious. The Dolpo trek start flying from Kathmandu to Nepalgunj for 50 minutes and tan after fly to Juphal for 30 minutes more or less. The trek to Upper Dolpo is fully camping and need to arrange all food and tent.

Special trekking permit nee to trek into the Dolpo region and need to join a government registered trekking company in Nepal as well as need two trekkers minimum in a group size.

Shey-la which is also called Geln La is about 5000 meters high pass inside Upper Dolpo trek. Anoter pass Kagmara-la which is 5115 meters, Numa-la which is  5360 Meteres, Baga-la pass 5090 Meteres all are inside the upper Dolpo region and no need any skills as well as no need any ice axe and crampons.

Buddhist monasteries which is known as Shey Gompa wildlife, pristine lake, mounting peaks and peoples lifestyle is another attraction of the trek. A holy mountain located  called “Crystal Mountain”  each year hundreds of pilgrims travelers visit upper Dolpo region and make a circuit of this  mountain. The people of this region mostly speak Tibetan languages and  rarely some people can understand Nepali language.

Dhaulagari circuit trek is one of the remotest loop high pass trek in Nepal. This High pass trek is challenging and need a bit of normal climbing skills with crampons and ice axe.

The Dhaulagari Circuit trek route starts from the  Beni which is around three hours driving from Pokhara.

The trek route of Dhaulagiri Circuit is rocky, this high-altitude camping trek is one of the lesser-visited areas inside the Annapurna Himalayas. The first few days follow the Myagdi Khola River to the Chhonbardan Glacier, at the foot of Dhaulagiri. The landscape changes from tended farmland to barren, often snow-covered rocky mountains, all with views of Dhaulagiri and other Himalayan giants ahead.

Mt. Dhaulagiri, rises at 8167 meters which  is the sixth highest mountain of the world. The trek that initiates from a small and popular town that lies at the confluence of Myagdi River a The lush landscape, hidden valleys, High Mountain passes along with many snow-capped peaks like Mt. Dhaulagiri, Mt. Manaslu, Mt. Annapurna and other 23 neighboring peaks is a natural benefit that makes Dhaulagiri trek a natural heaven.

During the Dhaulagari Circuit Trek passing these snowcapped mountain is not only the achievement but exploring richness in flora and faunas is a treasure that it holds within its jungle, hills, and unchanged agricultural lands.

Kanchenjunga Trek gives you to explore to reach the base camp of the world’s third tallest to  enjoy the isolation. Mt. Kanchenjunga is considered to be one of the most beautiful mountain massifs in the world.

Kanchenjunga trek begins after we fly to Bhadrapur from Kathmandu about 50 minutes, this  journey is a less crowded trail also rewards us with a unique vision into the pastoral Nepalese lifestyle of the country’s eastern region.

The ridge of Kanchenjunga covering 4 peaks over 8000m and 7902m Kangbachen rules the scenery without taking any splendor from stunning adjoining frequent 7000m peaks plus Jannu and Pyramid peak.

Kanchenjunga trek route has 3 passes ,  Mirgin, Tamo-la and Simion-La at above 4,500 m, on reaching the top fantastic views of Makalu , Baruntse, and Chamlang Himal.