Doing the Everest Base Camp Helicopter tour is the best way to land at Mount Everest. You can also explore Mount Everest within 4 hours from Kathmandu to Kathmandu. In this helicopter flight, you will fly to Lukla airport in 50 minutes. This flight is a great opportunity to explore the world’s unique airport in Khumbu.

Flying to the Everest region by Helicopter itself is a unique adventure. The flight is amazing. During the scenic flight, you’ll see snowcapped mountains on your right and green high on your left.  You will also see big waterfalls cascading down from high mountains.

From Lukla, Helicopter will lift up with the passengers to the Kalapatthar, 5555 meters. You will fly over the Everest Base camp with its closest views. In route, you’ll see alluring glacial views. You’ll also see the rivers originating from Mount Everest.

Landing at the exact mount Everest Base camp is not permitted by Nepal government. The landing permit is allowed in cases of emergencies only. Kalapatthar is like a lap of Mount Everest where the Helicopter lands. You can take plenty of photos and videos there. The landing will be only 8 to 10 minutes because of high altitude. Due to less oxygen there, the engine of a Helicopter cannot switch off.

Another exciting part of this tour to Everest Base camp by Helicopter is landing at Syangboche for breakfast at Hotel Everest view. You will have around 30 minutes. Sitting on the terrace of the hotel, you will have breakfast. 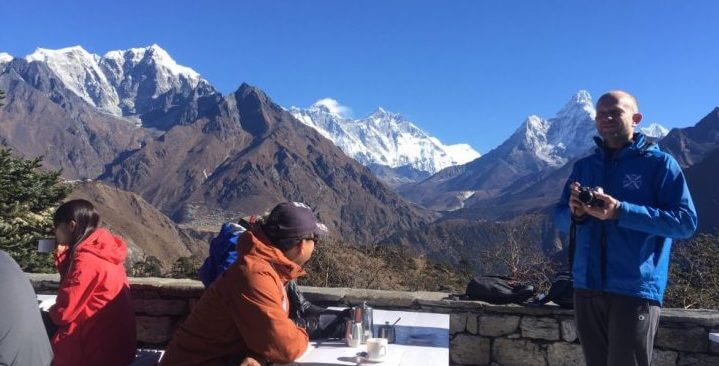 After breakfast, we will fly down to Lukla and refuel our Helicopter. From Lukla, we will fly back to Kathmandu which takes around 50 minutes.

Normal itinerary for Kathmandu to Everest Base Camp by Helicopter.

6:00 AM Drive to Airport, takes 30 minutes, Boarding and around 7 AM fly to Everest.

We will drive to Kathmandu airport in the morning. It will take 30 minutes. After checking in, we will take off at around 7 am. We will fly towards the northern hills. Enjoy the aerial views of Kathmandu valley.

8:00 AM Around we will be at Lukla and refuel the Helicopter fly to Everest.

After almost an hour of the flight, we will reach Lukla. The helicopter lands at Lukla for fueling. Lukla is the gateway to the Everest region. After fueling, the helicopter will fly towards Everest. You will fly above Namche Bazaar, Tengboche monastery, Khumjung village, and entire Khumbu towards Mt. Everest.

8:30 AM Around Fly to Everest Kalapatthar and fly back to Hotel Everest view for breakfast.

After around 30 minutes, you will reach the Everest base camp. Landing at the base camp is not allowed by the Nepali government. We will fly so close over the base camp and will land at Kalapathar, 5555 meters. Kalapathar is the best viewpoint of Mt. Everest.

During your 10 to 15 minutes landing, take some photos. Enjoy the astounding Himalayan views. You’ll see the gigantic Everest right at the tip of your nose. From Kalapathar, the helicopter flies towards Hotel Everest View.

The helicopter lands at the hotel. You can have breakfast of your choice at the hotel. Everest View Hotel is the highest placed hotel in the world. Enjoy your delicious breakfast with enchanting Himalayan views.

After having breakfast there, we will fly again.

10: AM around Start flying to Kathmandu.

11: AM Around you will be land at Kathmandu airport.

At around 11 am, you will land at Kathmandu airport. Your helicopter tour ends now.

Cost for Kathmandu to Everest Base Camp by Helicopter.

Group joining cost 990 to 1200 USD per person depend on number of group size.

Private Charter cost is 3700 USD per person around if the number of person for tour is 3, If the number of person is up to 5 which cost you around 4300 USD, because Helicopter has to make two shuttle from Hotel Everest view –Kalapatthar –Hotel Everest view. The helicopter can not carry more than three persons from Phiriche to Kalaptthar because of High altitude. There are not seat for more than 5 person in one Helicopter.

The best month for Kathmandu to Everest Base Camp by Helicopter.

Best moth for the Everest base camp by Helicopter is February to May – End of September to middle of December.