We all are familiar with Mt Everest, aren’t we? It is the highest point on planet earth, and as of today no human-made building or architecture has been able to surpass it, well except for planes! Every year thousands of individuals flock into Nepal with a dream of setting foot on the world’s highest mountain. But sadly, it isn’t as simple as it sounds! Many make it, but some fail to do so!

Since 1953, when Sir Edmund Hillary and Tenzin Norgay first submitted the peak, thousands have completed the summit and with the growing tourism, probably even more in the future. But many facts of the mountain have remained beneath the people. So that’s why we have compiled a list of some of the exciting and captivating facts about Mount Everest that you probably didn’t know about!

Let’s dive into the 25 Amazing Facts Of Mount Everest which you didn’t know about!

1. The mystery of the first climber.

We all have heard from our childhood that Sir Edmund Hillary and Tenzin Norgay were the first people to set foot on the world’s highest peak and official reports support the fact. But did you know that two climbers George Mallory and Andrew Irvine had attempted to climb the summit even before them in 1924?

However, whether they made it to the summit or not still remains a mystery. The duo were last seen on the 8th of July ascending towards the top. Many people believe that they did reach the top but died on the way down; others disagree with these statements. Till today this remains a topic of big controversy and mystery!

2. The height of Mt Everest increases every year.

According to one survey conducted, the height of Mt Everest increases every year by 4mm. This happens due to the collision of the Indian-Australian and the Eurasian plates. Scientists experimented by mounting a GPS on a plateau below the summit.

3. Climbers with the most successful summits.

While climbing Mt Everest might be a feat for some people, for others it is just like a casual hike. Kami Rita Sherpa became the first person to climb Mt Everest a record-breaking 24 times with his latest ascend on 20th May 2019. Before that Apa Sherpa held the record of 22 successful summits.

4. The year when no one attempted the summit!

The year 1974, also regarded as the maiden year was the only year in history when no one attempted to climb Mt Everest!

Yep, you heard that right! As of today, there are about 200 dead bodies up at Everest. They mostly are climbers and Sherpas who failed to make the summit or descend down to the base camp safely.

The evacuation of these bodies is also very challenging and risky due to the high altitude and unsupporting weather conditions. Hence, the bodies pile up there, making Everest the ‘Highest Graveyard in the world’. According to the statistics, approximately 4% of all the successful attempts have ended in the death of the climbers.

Green boots is the name entitled to a dead body in the death zone of Everest and acts as a landmark for passing climbers. Many people pass by the body, but very few know the story. People claim that the deceased person’s identity is Tsewang Paljor, an Indian climber who died during his descent after successfully reaching the peak in 1966.

The ‘death zone’ in Everest refers typically to the altitude above 8000m. It has earned its notorious name for its extremely high altitude and thin air which can prove fatal to the human body if exposed for a long duration.

The air is so thin at the death zone that the body’s cells start dying out. Our brains and lungs do not get adequate oxygen levels and cause issues like visual impairment, HAPE, HACE, heart-attacks, or other medical emergencies which can be fatal. Among all the deaths that have occurred on Mt Everest, the death zone holds the maximum number.

Now, this is some spooky and mysterious fact, and although it is not proven scientifically, many people claim to have experienced it! People who often experience the third man factor describe that they feel or sense an unseen being which helps them in critical moments, and although you feel them they are not physically present.

Mind-boggling, isn’t it? Many people have admitted to this phenomenon with one such climber named John Geiger even publishing a book entitled The Third Man Factor: Surviving the Impossible.

Meanwhile, science has explained the phenomenon as a third man syndrome. A condition that occurs when your body gets starved for adequate oxygen creating hallucinations and impaired vision. What is the actual truth? We will have to wait and see!

With the growing tourism, the number of summit attempts increases every year. This usually results in massive traffic of people on the way to the summit. The government of Nepal does not impose any barriers or criteria for climbing Mt Everest, thus granting opportunities to even inexperienced climbers. Recently huge traffic at the death zone has led to several accidents and deaths.

10. The Youngest and The Oldest Climber

The youngest person to climb Mt Everest is Jorden Romero from the USA who achieved this incredible feat in 2010 when he was just 13 years old! He had attempted the summit with his father Paul Romero, his step-mother Karen Lundgren, and three Sherpas.

The oldest person to successfully climb the summit till today is Yuichiro Miura from Japan who ascended in 2013 at the age of 80. He beat his previous personal record of climbing at the age of 70 during 2003.

11. Wedding on the summit

A Nepalese couple performed their marriage at the summit of Everest, being the first ones to do so! Moni Mule Pati and Pem Dorjee Sherpa did not disclose their intentions until they reached the peak where they spent about 10-15 minutes which was enough to perform necessary rituals of the wedding.

George Everest, who was the Surveyor General of India during the 18th century first discovered Everest. Thus as a tribute people named the mountain after him!

13. The first tweet from the top of the world

Kenton Cool made the first tweet using his handset from the summit of Mount Everest by means of a weak 3G signal. The tweet stated “Everest summit no 9! 1st tweet from the top of the world thanks to a weak 3G signal &amp; the awesome Samsung Galaxy S2 handset! @samsunguk”. Although the internet is weak and not much prevalent around the base camp or the summit, most tea-houses and lodges along the way provide the internet with good strength.

Let’s admit it; we’ve all thought about this at one point of our life! Why should we take all the long climbs and potential risks? Why can’t we fly to the summit? Well flying to Everest is not as easy as it sounds.

The high altitude and thin air make it difficult for choppers to gain the required elevation. Also, the winds and turbulence at that altitude are terrible for aircraft. However, Didier Delsalle, a french pilot became the first person to land at the summit using a helicopter. The chopper was an AS350 series of the airbus family, and the developers stripped the helicopter down to make it compatible with the experiment.

Do these creepy crawlers make your skin cold? Everest could potentially be a nightmare for people who are afraid of spiders as you can find numerous variations of spiders around the mountains with the ‘Himalayan Jumping Spiders’ being the most prominent one. These spiders live up to an elevation of 6700m and usually feed on springtails and other small invertebrates.

16. Paragliding off the summit

Two Nepali nationals, Sanobabu Sunuwar and Lakpa Tshiri Sherpa paraglided all the way from the summit to Namche Bazaar in 40 minutes. The duo received the National Geographic Adventurers of the Year of 2012 for this remarkable act. Further, the pair extended their adventure by kayaking through the Indian Ocean to the Bay of Bengal!

However, the duo are not the first people to paraglide off the summit. Jean-Marc Boivin holds this record when he paraglided from the summit in the year of 1988.

Apart from the well-known name, Mt Everest has different names, each carrying a significant meaning. Nepalis refer Mt Everest as ‘Sagarmatha’ which means “Forehead in the sky” whereas the Tibetans and refer the mountain as “Chomolungma” which means ‘Mother of the World.’ Similarly, the Chinese people refer to the mountain as “ Zhumulangma.”

18. A person who survived a whole night at the death zone

Lincoln Hall, an Australian climber, had collapsed at the death zone, and when he showed no signs, the rest of the crew left him there. But to everybody’s surprise, he was not dead yet and was surviving despite staying a whole night without oxygen or appropriate clothing.

This incident made Hall quite popular, and his story was very famous amongst travelers! Lincoln Hall sadly passed away after a long battle against mesothelioma at the age of 56.

19. It is not the actual highest mountain in the world

Would you believe me if I tell you that there is another mountain in the world that is higher than Everest? Probably not, because the mountain is not as well-famed as Everest. However if we were to measure the length of the mountains from the base to the summit, Hawaii’s Mauna Kea edges over Mount Everest with a staggering altitude of 10,000m from the bottom. But since the majority of its surface lies beneath the waters, the mountain just measures above 4000m from the surface of the water to its summit.

Climbing Everest during the winters can be very troublesome. The freezing temperatures and winds can create potential risks. However, two polish climbers Krzysztof Wielicki and Leszek Cichy made the first successful winter summit during the month of February in 2017.

With the growing number of summit attempts every year, thousands of waste items are getting piled up on the lands of Mount Everest making it the dirtiest mountain in the world. Most of the waste is from the Nepal side as there is a lack of proper management of waste.

However, the government of Nepal has banned the use of plastics in the area recently and also imposed the rule that every climber needs to bring 8kgs of waste during their descent if they do not want to lose their $4000 deposit.

Every year on May 29th, we celebrate the Everest day in remembrance of the first ascent of the world’s highest peak by Sir Edmund Hillary and Tenzing Norgay Sherpa. Communities conduct small events and processions in the significant cities of Nepal.

Fierce winds occasionally howl on the path to the summit. If you have seen specific videos of Everest on youtube, you might have heard the camera capturing these winds. These winds blow at a staggering rate of 200 miles/hour.

24. First Person To Climb Without Oxygen

Reinhold Andreas Messner, an Italian mountaineer, became the first person to summit Mt Everest without additional oxygen. He achieved this marvelous feat on 8th May 1978 alongside Peter Habeler. Two years later, he again summited Mt Everest, solo and without any supplementary oxygen.

25. Longest time spent on the summit

In 1999, Babu Chiri Sherpa became the first person to spend 21 hours atop Everest Summit without auxiliary oxygen. He also made the fastest ascent of Everest achieving it at around 16 hours and 56 minutes. 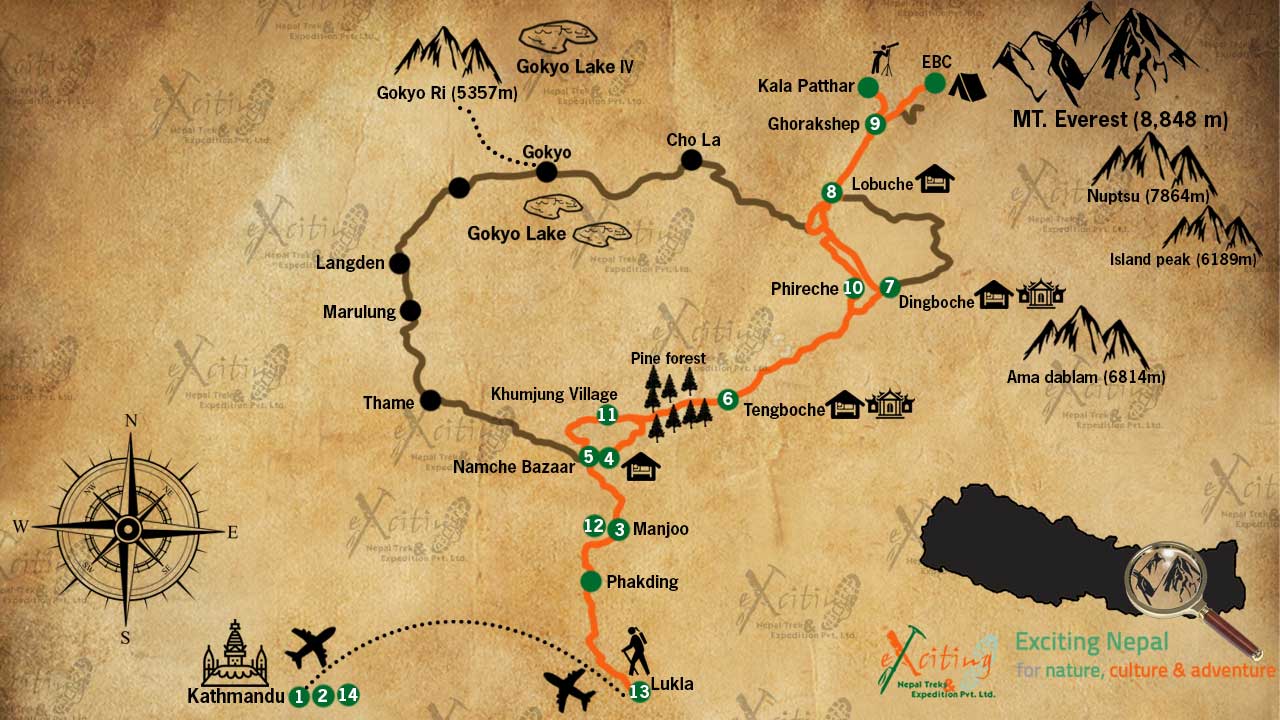