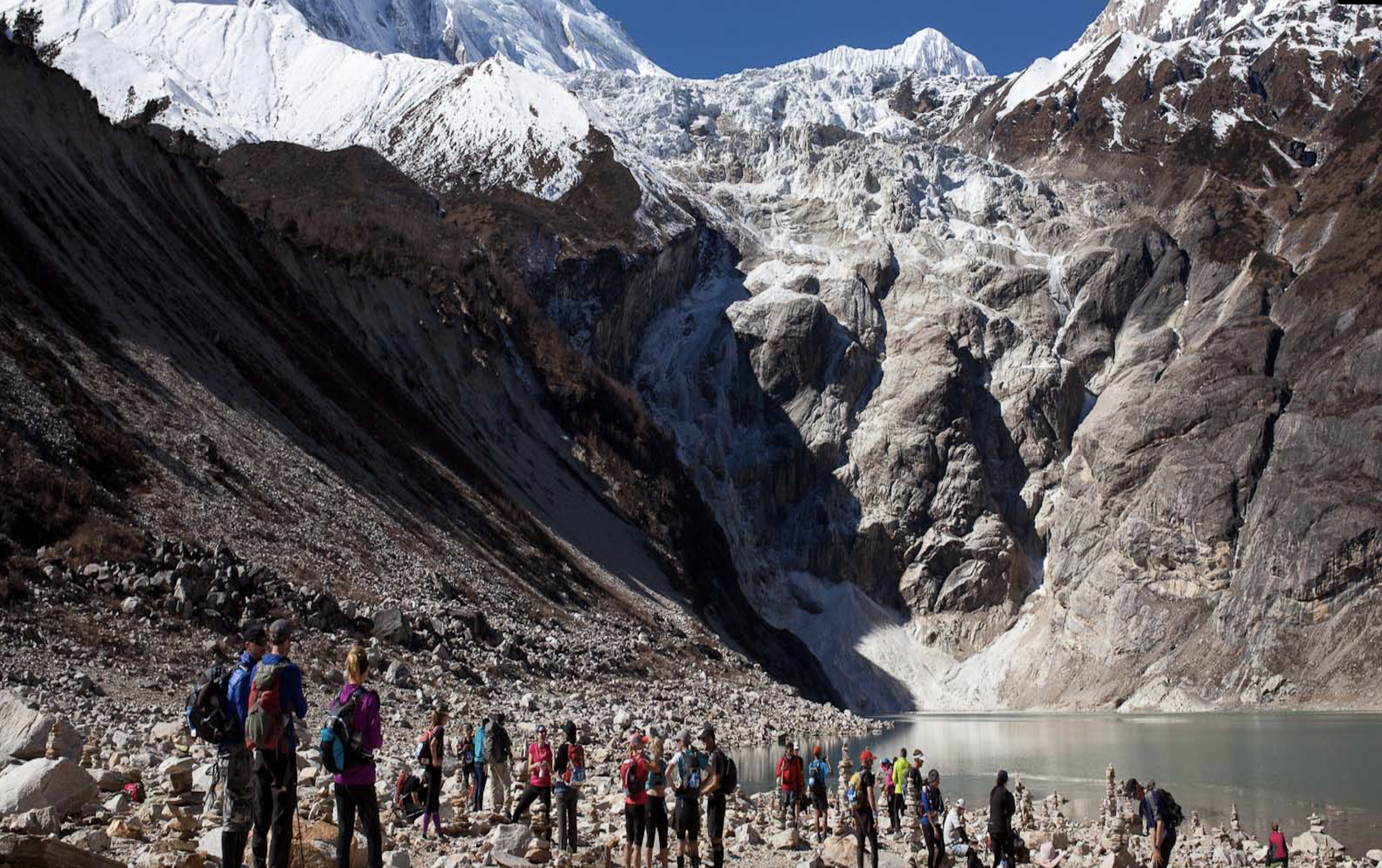 Manaslu circuit trek Start from Aarughat bazar entering with Manaslu conservation area and end with Dharapani which is in the Annapurna conservation area.This is one of the best loop trek route of Nepal Himalaya which offers the view of both ranges of Himalaya Manaslu and Annapurna range. Doing this trek, we need to issue the entry ticket for both conservation area. Manaslu is region trek is in remote area trek but the another part of the this loop Annapurna trek route is a normal trek route.

We need special trekking permit for the Manaslu. Needed at two trekkers to issue the permit of Manaslu trek and need at least a guide or porter to do this loop trek of Manaslu. Normal days for this trek is 12 to 15 days and takes to hi pass Larkya-la in the elevation if 5213 Meters. There is no exact figure of kilometers distance of the Manaslu  circuit trek but it is more less 200 Kilometers of circuit. The main attraction of this circuit is Jagat,  Deng  Namrung – Lho- Samgaoun- Samdo – Tilje are the villages where trekkers are normally do the camp. Read more…

The Annapurna Circuit trek normally trek by anticlockwise from Beshishar to Pokhara. During the trek , trekkers has option to take transportation in-between such as Beshishar to Manang and from Muktinath to Pokhara , the optional trek route is also available for the adventure lover.  The trekkers may add more days to choose the different routes or can choose the short routes to avoid the longer treks, During the Annapurna circuit treks the high pass is called throng-la which is 5416 meters up from the sea level. The main villages during the treks of Annapurna circuit  are Beshisihar – Chame, Pisang, Manag, Muktinath , Tato pani ( Hot spring ) , Ghorepani.

No doubt Annapurna  circuit trek offer stunning Himalayan views as well as the main interesting this we can see the same Mountain peaks with different perspective and always looks different from every camp. It is normal that trekkers do the acclimatization (one day rest ) at the  Manang village. The reality nowadays is craze of this loop trek decreasing its popularity every year due to the road constructions which used to be the world’s top loop trek, Read more…

The trekkers those who have go short time frame and but would like to enjoy the panorama with mount Dhaulagiri. The highest point of this trek of this trek is Poon hill which is in 3210 meters up from the sea level. Poon hill is the best view point of view the Annapurna Himalayan range as well clear view of amazing Mt. Dhaulagiri. The main villages during the treks are Tikhedubga, Ghorepani, Tadapani- Ghandrung. Abeautiful city of Pokhara is beginning and ending point of Ghorepani poon hill trek.  Ghorepani ppon hill trek normally we do by clockwise from Nayapool-Tilkhedunga –Ghorepnai-Poonhill-Tadapani –Ghandrung –Nayapool-Pokhara. As an option we can also take a haring jeep or local bus to Pokhara which takes around more or less four hours. Read more 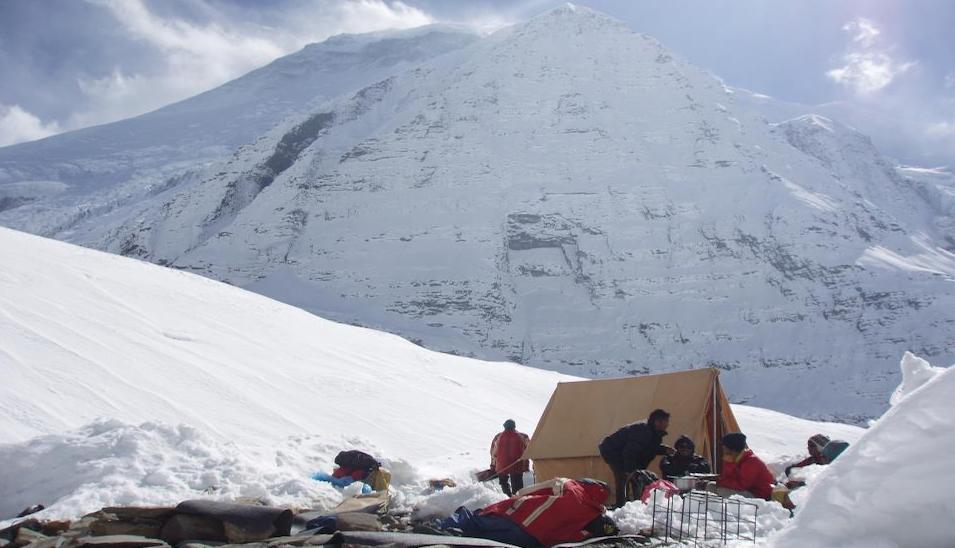 Dhaulagiri Circuit trek is one of the remote loop trekking route of Nepal.  Dhaulagiri Circuit Trek explores a wild, remote and off the beaten track area of Nepal Himalaya. The trail  starts from  Beni,  follows the Myagdi Khola River passing through beautiful Gurung villages with terraced fields framed by views of the Dhaulagiri massif. Walking up the narrow Chonbarden valley towards Dhaulagiri Base Camp then cross French Pass into Hidden Valley. The seventh highest mountain in the world Mt Dhaulagiri is one of the popular mountain, which lies  west of Pokhara ending to its highest point at the eastern end. Dhaulagiri is almost unique in the world in terms of its rise above local terrain where it rises to 7000m over the Kali Gandaki gorge to the south east in about 30 km of aerial distance.

Annapurna I and Dhaulagiri both stand close to  the river facing each other over a deep valley. The trek around three weeks. Starting from Pokhara which is 200 KM from Kathmandu. A lush valley among refined fields, and passes through the rhododendron and alpine forests as well as fields with high passes, hot spring, waterfall, and plenty of stunning scenery during the trek.

Dhaulagiri Circuit trek route covers snow and glacier as it crosses French Col. (5,240m) and Dhampus pass (5,155m).  The trek crosses high passes and rivers of Kali Gandaki and Bheri stands Mt. Dhaulagiri, a massive elevation with a continues to Marpha and by passing the best panorama view of Mt.Annapurna which has 14 peaks rising over 7000m in height, including Mount Dhauligiri, the sixth highest mountain in the world, at 8167m.  The incredible views of Ice Falls and Glaciers make this trip worthy enough for those who have only dreamt of such an adventure. Trekkers need experience as well as basic mountaineering skills to do this trek. Read more…

Mt. Kanchenjunga lies on the far eastern side of Nepal, Solo hiking is not allowed and local guides must be employed to find permits.

Kanchenjunga Circuit trek is an unforgettable adventure into the heart of the Nepal Himalaya where the scale of both mountain and valley is difficult to comprehend.  Trekking does not get any healthier than Kanchenjunga Circuit trek.. the huge north wall of Mt.Kanchenjunga bursts into view, with a shelf of grass falling down the grade towards its base. This is Pangpema (5140m), one of Nepal’s most treasured sites.