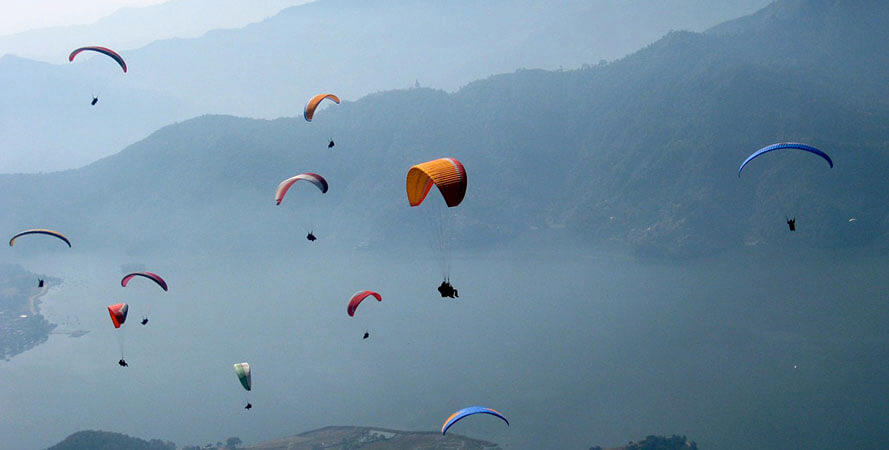 Major sightseeing places in Nepal which are outside the Kathmandu valley:

Is a popular tourist resort of Nepal. It is situated 32 kilometers east of Kathmandu at an altitude of 2,175 m. above sea level. A panorama of the major peaks of eastern Nepal Himalayas including Sagarmatha (Mt. Everest 8848 M) can be seen from here. A magnificent sunrise and sunset can be enjoyed from here.

Located 29 kilometres north-west of the Kathmandu city, the fabulous holiday area of Kakani features attractions ranging from beautiful alpine scenery to the magnificent Himalayan panorama particularly of the Ganesh Himal massif. Other peaks that can be closely seen from Kakani are; Gaurishanker ( 7,134m.), Choba Bhamre ( 6,109m.), Manaslu ( 8,163m.), Himalchuli (7,893m.), Annapurna (8,091m.) and several other peaks.

One of the most famous religious places of pilgrimage of Nepal is Gosainkunda lake, situated at an altitude of about 4360 m. The best approach to Gosainkunda is through Dhunche, 132 kilometres north east of kathmandu. Dhunche is linked with Kathmandu by a motorable road. Surrounded by high mountains on the north and the south, the Lake is grand and picturesque. There are other nine famous lakes such as Saraswati, Bhairav, Sourya and Ganesh Kunda, etc.

This ancient town is situated 30 kilometres east of Kathmandu on the side of the Arniko Rajmarga (Kathmandu-Kodari Highway). From here one can have a complete panoramic view of the snowy ranges from Karyolung in the east to Himalchuli in the west.

It is a thriving village of the road to Dhulikhel, with some very lovely temples and interesting old houses, particularly beautiful area some fourteenth century wooden temple struts. The drive is through beautiful countryside.

It is situated on a hill above Panauti. It requires an easy drive or good walk to get here. There is an amazing story concerned with the Buddha which is commemorated by an ancient stone slab and a Stupa with the all- seeing eyes of Lord Buddha.

The route from Dhulikhel to Timal Narayan is ideal for a short trek. From here one can have a beautiful view of Gaurishanker Himal and other important peaks as well as Sunkoshi river. It is also very pleasant to visit the villages of the Tamang people who live in this area.

7 kilometres north of the mountain of Panchkhal, on the top of a hill lies the noted historic temple of Palanchowk Bhagawati. The temple houses a three feet long beautiful artistic stone image of Goddess Bhagawati.

About 133 kilometers from Kathmandu, Charikot provides a spectacular mountain view of the Gaurishanker. In the eastern upper part of Dolakha township there is a famous roofless temple of Dolakha Bhimsen.

Helambu situated about 72 kilometers north-east of Kathmandu is famous for its scenic grandeur and pleasant climate. There are many Buddhist monasteries amidst a rich and enchanting landscape. Sundarijal is the starting point to trek to Helambu which is mere 11 kilometers away from Kathmandu.

Gorkha is the birth place of King Prithvi Narayan Shah- the Great, the founder of modern Nepal. Situated on a hill overlooking the snowy peaks of the Himalayas, there is a beautiful old palace known as Gorkha Durbar. It’s the first capital of Nepal. There are two attractive temples of Gorakhnath and Kali inside the palace precinct. Only Hindus are allowed inside the temple of Gorakhanath. Gorkha is very enjoyable, interesting and one of the hiostorical places.

The famous temple of Lord Muktinath lies in the district of Mustang and is situated about 18 kilometers north east of Jomsom at an altitude of about 3,749 meters. The temple is situated on a high mountain range and is visited during fair weather. There are two ways to get to Muktinath from Kathmandu. Either to take a direct flight from Kathmandu via Pokhara to Jomsom and hike for a couple of hours via Kagbeni or to trek all the way from Pokhara. There is also air service from Pokhara to Jomsom.

The Muktinath valley is full of many natural and cultural attraction. Amongst them , the ” Muktinath Temple Complex” with various natural. Cultural and spiritual manifestations , is the canter attraction . In straight terms, Mukti means ” Salvation” & Nath is ” Lord “, ” Muktinath” therefore. Is the lord of “salvation” , & the valley, ” The salvation Valley”. A pagoda style ” Vishnu Temple ” lying amidst the sacred poplar groove dominates the temple complex. The Vishnu temple is a syambol of religious symbiosis between the Hindu &the Buddhists, of which later worship Vishnu as ” Avalokiteshvara . It is said, that the poplar groove grew of the walking sticks left here by the 84 grate magicians from India on their way to Tibet ”

There are 108 brass waterspouts, shaped in cow`s heads, along the courtyard of Vishnu temple. Those spouts are also associated with the 84 magicians. Each magician is belived to have ladled water to the spouts from the scared lake of Manasarowar,in western Tibet . A holy bathe under all these spouts is said to bring salvation !
Another attraction in the temple complex is the Jwala Mai Temple, Where the eternal flame gifted by Brahma burn is little caves. Among Buddhists, the temple is popular as Salamebar Dolamebar Gompa, the temple of the miraculous fire. The temple is situated south of the Vishnu temple.

The Pokhara Valley – one of the most picturesques spot of Nepal, is enhanced by its lovely lakes Phewa, Begnas, and Rupa. Situated 200 kilometers west of Kathmandu, Pokhara is connected by air as well or by bus from Kathmandu and Bhairahawa a border town near India. Situated at an altitude of 827 meters from the sea-level, Pokhara offers the magnificent views of Dhaulagiri, Manaslu, Machhapuchhre, five peaks of Annapurna and others. Pokhara’s numerouslakes, known as ‘tal’ in Nepali offer fishing, boating and swimming.

Situated at an altitude of 1343 m. above sea level. Tansen is the most popular summer resort in western Nepal because of its position and climate. It has perhaps Nepal’s most far stretching views of the country’s chief attractions, the Himalayas from Dhaulagiri in the west to Gaurishanker in the north east. It takes just 4 hours by bus from Pokhara to reach Tansen.

Lumbini is the birthplace of Lord Buddha, the apostle of peace, and nonviolence. It is situated 250 kilometers southwest of Kathmandu. The broken Ashokan pillar, remnants of an old monastery, images of Buddha’s mother Maya Devi, etc. are still preserved in Lumbini. It is accessible by air from Kathmandu to Bhairahawa. Also one can reach Lumbini in about 3 hours by bus or car from Tansen via Bhairahawa. From Kathmandu it takes about eight hours by bus or car.

Rapti Valley (Chitwan): From Kathmandu it takes six hours to reach Chitwan. Situated 120 kilometers southwest of Kathmandu, the main attraction of Chitwan is Royal Chitwan National Park. This is one of the Nepal’s largest forest regions with a wide range of wildlife- the rare great one horned rhinoceros, several species of deer, sloth bear, leopard, wild boar, fresh water dolphin, crocodile, more than 350 species of birds and the elusive Royal Bengal Tiger. Visitors to Chitwan may view game of elephant back excursions, nature walks, and canoe trips, from window and on Jungle treks. There are several authorized agencies to organize such safaris. Visitors may also take river raft trips, driving from Kathmandu to the river Trisuli or Seti Khola.

It is situated 80 kilometers southwest of Kathmandu at an altitude of about 2,400 meters. Daman is located on the Tribhuvan Highway in between Kathmandu and the town of Birgunj. For the view of the breathtaking grandeur of the world’s highest peaks extending in one glittering are from far-west of Dhaulagiri to far-east of Sagarmatha (Mt. Everest) there is no better place than Daman. There is a view tower fitted with long-range telescopes. Daman can be reached in four hours from Kathmandu.

A few kilometers from the main city of Biratnagar, Barahachhetra, the holy place of Hindu pilgrimage, lies at the confluence of the two rivers the Saptakoshi and Kokaha. There is the temple of Lord Baraha, the boar incarnation of Lord Vishnu. Historians have traced the existence of this image from the twelth century.

It is situated about 13 kilometers north of Dhankuta Bazaar. The panorama of the major peaks of the eastern Himalayas including Sagarmatha (Mt.Everest) Makalu, Lhotse and Kumbhakarna.
Antu Danda : It is situated at an altitude of 1,677 m. in the llam district and is famous for its unique views of Everest and Kanchenjunga. It is the best place for viewings sunrise and sunset. There is a motorable road from llam to chhipitar.

Bandipur is situated in between Kathmandu and Ppokhara at an altitude of about 2,000 meters. For the view of the breathtaking grandeur of the world’s highest peaks extending in one glittering are: Hiunchuli, Annapurna I (8091m) Annapurna III 7,555m), Gangpurna (7,454m) & Machhapuchhare (fish tail) and Dhaulagari (8167m) Manaslu. You will see very nice Gurung village. 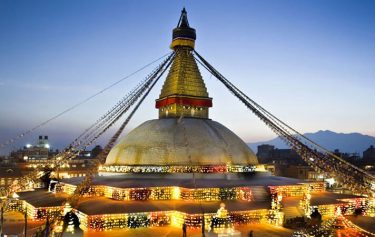