Asia’s Himalayas are the tallest mountain range in the world. They stretch across six countries: Nepal, China, India, Bhutan, Pakistan, and Afghanistan.

The Mount Everest Located exactly at the border of Nepal and Tibet in South Asia. In 2005 China’s National Surveying and mapping Administration announced the exact location of Mount Everest is 27°59’ North latitude, 86°55’ East longitudes.

Mount Everest, lies in the Mahalangur range of the great Himalayas of Asia. To know the exact location of Mount Everest, you must know its home country first. Mount Everest lies in a small landlocked south Asian country named Nepal.

Mount Everest resides on the east section of border between China’s Tibet Autonomous Region and Nepal. The summit is between Tibet and Nepal. So, Everest is half in Nepal and half in the People’s Republic of China.

Map of world maps Mount Everest (8,848m) in the country Nepal. In Nepal, Everest lies in the eastern part of Nepal in Mahalangur range of the Himalayas.

Where Is Mount Everest in Nepal?

The political map of Nepal indicates Mt. Everest in the ward number 4 of Khumjung VDC of Solukhumbu District in Sagarmatha zone. Everest sits in the Sagarmatha National Park.

From the Nepal side of Everest, getting to the Base Camp is a long journey. Mountaineers use the route to move up to the advanced base camps before attempting to climb the mountain.

Getting to Everest on the Nepal side is hard and a dangerous route. Starting in Kathmandu with a flight to Lukla, journey to the EBC is a 14-day trek through Namche Bazaar, Tengboche, Lobuche, and Gorak Shep.

There is no view of the peak from Everest Base Camp in Nepal. The ridge of mountain blocks the view. To get the closest view of the peak, one must travel from Gorak Shep to Kala Patthar, a hill nearby, which is a great view point of Everest.

To catch a different view of Everest, trekkers also choose Gokyo lake trek and catch the stunning views of Everest from Gokyo Ri.

Where Is Mount Everest in Tibet?

The northern slope of Everest lies in the territory of the People’s Republic of China. It lies at the south edge of the Qinghai-Tibet Plateau.

On the Chinese side lies the northern base camp, known as Tibet EBC. The route to get to EBC in Tibet is much easier than getting to EBC in Nepal. There is a road that takes you straight to the tourist base camp itself.

Starting from Lhasa, we travel across the Tibetan Plateau, through Gyantse, Shigatse, and Lhatse, Old Tingri and to Everest base camp in Tibet. The base camp lies a little back from the climber’s base camp.

Unlike in Nepal, there is a clear view of the peak of Everest from the Everest base camp. The base camp is a great place to take photos.

Note: If you want to catch amazing views of Mount Everest you can go to the Everest base camp trek in Nepal. We have several travel packages designed for trekking to the EBC. Check out our Everest Base Camp Trek package.

Formation of Mount Everest in the Himalayas

Some 65 million years ago, the continent of Pangaea split into the seven continents we know today. That was when the entire Himalayan Mountain Range formed.

The resulting collision forced the mass of rocks along the edge of the Asian plate to ride up. The Asian and the Eurasian plates have been moving together slowly for more than millions of years. Thus, driving the huge rocks to form the Himalayas that we see now.

According to scientists, the Indian Plate is still moving northwards at the rate of around 1.5 centimeters per year. They believe that this tectonic activity has resulted in the height difference of the peak of Everest.

How High Is Mount Everest?

The highest mountain in the world, Everest stands at a height of 8,848 meters from the sea level. However, there is still debate on the exact height of Mount Everest.

China gave a more accurate reading of 8,848.13 meters in 1975. According to another reading that conducted in 1999, height of Everest is 8,850 meters. This was the height with a snow cap of about one meter above the rock peak.

In 2005, China revealed the rock head of the mountain to be 8,844.43 meters, with a snow cap of about 3.5 meters. Today, both heights are common. But in many places around the world, the listed height of Everest is 8,848 meters.

With advancement in technology, different surveying techniques keep on producing different results for the actual height of Mount Everest.

Geologists disagree whether to consider measurements based on permanent snow or the rock. Another challenge is the tectonic movement. This phenomena is making the mountain grow a little each year!

The highest peak, ‘Everest’, we call now has different names. It is famous in Nepal as ‘Sagarmatha’. In Nepali, ‘Sagar’ means the sky and ‘matha’ means the Forehead.

In Tibetan language, ‘Chomolungma’ meaning “Holy Mother” is the name of Everest.

Before the mountain got the name Everest, they called it the third pole. It had several local names too. But none were common enough to make official.

Finally in 1865, the peak derived its name from the land Surveyor General ‘Sir George Everest’. He was the first person to locate the exact position of Everest.

Sagarmatha, the Nepali name for Everest came into use since 1960s. 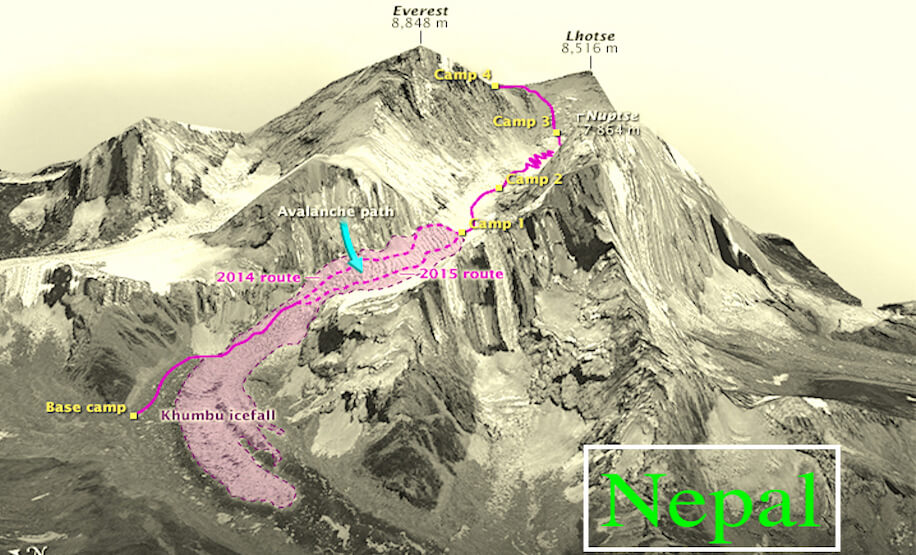 The Everest region is popular for mountaineering. Mount Everest Expedition is a challenging yet popular task. Enthusiastic climbers from all around the world have a place for this in their bucket list.

Sir Edmund Hillary, with his Nepalese Sherpa mate, Tenzing Norgay climbed the summit for the first time on May 29, 1953. The number of attempts has been increasing since then.

Climbing more than 8,000 feet is no easy. Deaths in Everest are unpredictable. Various difficulties like Altitude sickness, weather and wind are the major challenges to the climbers.

Because the summit is between Tibet and Nepal, one can climb the Mount Everest Tibetan from both the Tibetan side and the Nepalese side. The southeast ridge route is technically easier both for mountaineering and bureaucratic reasons. So, it is more frequently used these days.

Also, because of political restrictions and other factors, the Nepali side of Everest is most accessible. When you talk of climbing Everest or trekking to EBC, the southeast ridge from Nepal is more often in the spotlight.

Note: Climbing from the north is a little cheaper. But rescues are far more complicated. Helicopters aren’t allowed on the Tibetan side.