February marks the last month of the winter season in Nepal. Although not common amongst many tourists, trekking in Nepal in February can be a pleasant experience where you get to encounter the beauty of the surrounding landscapes canvassed in a thick blanket of snow contributing to a delightful view!

Many people inquire about the feasibility of February trekking in Nepal! Not only is it achievable, but it promises to provide you with an unforgettable experience that only a handful of people get to experience!

Although many people disregard February due to its reputation of being known as the off-season for trekking in Nepal, doesn’t necessarily mean you can’t do it! A large part of the well-known trekking courses are open, and the majority of the teahouses in the trekking courses are well open for accommodation!

Trekking in Nepal in February has its own points of interest. The trails are often less crowded, allowing you to indulge yourself in the natural beauty in absolute solitude. The temperatures are also pleasant during the day time, and the clear blue skies will bless you with some breathtaking views of the mountains.

Keep in mind though, that February still lies in the winter season and it is best to opt for low altitude treks as the morning and evenings are relatively colder which can pose as a barrier for high-altitude treks. Also, the thick layers of snow on the trails of high-altitude treks make it extremely difficult, even for experienced hikers!

The weather is also not the best during the February month, with frequent mist and fog shadowing the trails, especially in areas close to the Himalayas. It can result in unwanted delays in your trekking days. So, be sure to check on the weather before the trek.

As unforgiving as the weather might be, February will offer you magnificent views of the landscapes and mountains which guarantees to provide you with an everlasting experience that you will cherish for a lifetime!

Weather Of Nepal In February

Since February falls within Nepal’s winter season, the temperatures are still low and chilly with the climate resembling that of January. The temperature spikes up to around 10°C during the day and falls drastically to about 0°C during the night time.

The higher regions see even more freezing climates with temperatures dropping upto -20°C during the nighttime. So if you are opting for trekking in Nepal in February, the cold environment is going to be your biggest concern.

Also, since it is the driest time of the year, you won’t have to worry about rainfalls as there is a slim chance of it occurring. The early morning weather is generally misty and foggy that occasionally causes delays in air travel.

However, during the day, the humidity falls low, and due to very few clouds, the surrounding views are crisp and sharp. Also, since the days are relatively shorter, you will need to start and conclude your trek during February as fast as possible.

Occasional snowfalls on the higher elevated areas can close all the high passes and base camps cutting your trip short! So be sure to check on the weather before commencing the trek.

So if you are adamant of trekking in Nepal in February be sure to carry warm clothes to withstand the cold weather. Also, add some additional days in your itinerary as the unpredictable weather can cause unwanted delays.

Best Destinations For Trekking In Nepal In February

Ghorepani Poon-Hill trek is one of the shortest and easiest alternatives to catch a glimpse of the mighty Annapurna range without the hassle of the long and strenuous days of trekking. During the peak seasons, this trail is jam-packed, but during the February month the traffic of tourists is relatively lighter, and you can trek with absolute leisure.

The trek commences with a drive from Pokhara to Birethanti. You then walk along the ascending trail passing through the settlements of Ulleri, Tikedhunga, Ghorepani to Poon Hill. Enroute you pass through lush rhododendron forests and appealing landscapes.

Upon reaching Poon-Hill, you get to witness the magnificent view of the sun gleaming through the peaks illuminating the entire Annapurna range. Other than getting rewarded by the incredible view of the mountain, you witness the lifestyle and culture of the Magar and Gurung Settlements throughout the trek.

Since the highest elevation, we will be travelling during this trek is 3,210m, this is a low-altitude trek making it perfect for the February month. Also, the majority of tea houses along the trail are open for business, so finding accommodation will not be a problem.

Day 05: Trek from Ghandruk to Birethanti and drive to Pokhara

Mardi Himal Trek is a hidden gem in the Annapurna Region offering magnificent up-close views of the Mardi and Macchapucchre mountains. Since the government officially opened the trek in 2012, it sees plenty of tourists during its peak seasons.

However, only a handful of people opt for the trek during the February month due to the cold climate. This grants you the opportunity to perform the trek in absolute solitude.

The Mardi Himal Trek is a relatively comfortable trek, and any individuals having an average physical endurance can opt for it. The trek commences with a drive from Pokhara to Kande and further trekking towards Deurali.

We then continue along the trail passing through the forest camp, low camp, and eventually into the High Camp. We then ascend towards the Base camp for fantastic views of the Annapurna Range.

The trek takes you to the highest elevation of 4500m where the Base camp lies. The trails at a higher altitude can be snowy if you happen to travel during the first half of the February month. Also, the tea-houses are open for business during this time of the year, contributing to a hassle-free adventure.

Day 07: Siding Village to Lumre and drive to Pokhara.

The Annapurna Base Camp trek is one of the most popular trekking destinations in the world blessing you with fantastic views of the verdant landscapes, blooming vegetation and a majestic up-close look of the world’s tenth highest mountain (Mt. Annapurna).

The trail sees heavy traffic of tourists during the autumn and spring season with people all over the world flocking to opt for the trek. However, during February you can only find a handful of enthusiast trekkers along the trail. It almost feels like a private trek!

You don’t need to worry about the accommodation either as all the tea houses start opening from the start of February. Also, since it is not the peak season, finding rooms will not be a hassle.

The trek commences with a scenic drive from the magical city of Pokhara to Tikedhunga. The trail further continues along the villages of Ghorepani, Tadapani, and Chommorong into MBC (Machhapuchhre Base Camp). A few hours of walking from MBC eventually leads us to the Annapurna Base Camp. The trails contain textures of snow which contribute to a magnificent picture!

Pikey Peak Trekking is an alternative option for individuals looking to witness the majestic mountain range of the Khumbu region in a limited amount of time. This 8-day trek blesses you with magnificent views of the snow-clad mountains. Some of the significant ones include Mt Everest, Mt Kanchenjunga, Mt Dhaulagiri, Lhotse, Makalu.

The trek commences from the city of Shivalaya and continuing along the trail as we pass through the settlements of Bhander, Namkheli and Ngamor Gompa. We eventually reach Pikey Peak, which blesses you with the jaw-dropping panoramic views of the towering peaks in the Khumbu Region.

The pikey peak lies at an elevation of about 4000 m making it suitable for trekking it even during February. You also don’t need to worry about the accommodation facilities because unlike the peak seasons, February witnesses very few tourists allowing you to trek in absolute leisure and comfort.

Do you wish to witness the world’s highest peak but limited by time or physical endurance? If so then the Everest Base Camp Panorama Trek is the perfect fit for you! The trek allows you to catch a glimpse of Mt Everest and its neighbouring giants up close! You also get to visit the ancient and well-famed Tengboche Monastery.

The EBC panorama trek is an ideal option for visiting the Khumbu region during February. During this time of year, performing the conventional Everest Base Camp Trek is quite challenging due to the underlying climatic conditions and unpredictable weather. Avalanches and landslides further add potential risks of the trek.

The trek commences with a flight from the capital to Lukla. From Lukla, we ascend towards Tengboche, which will be our final destination for the panorama trek. En route we pass through the well-famed town of the Khumbu region, entitled Namche Bazaar. If you’re looking to visit the Khumbu region during February, then this is the trek I would recommend! 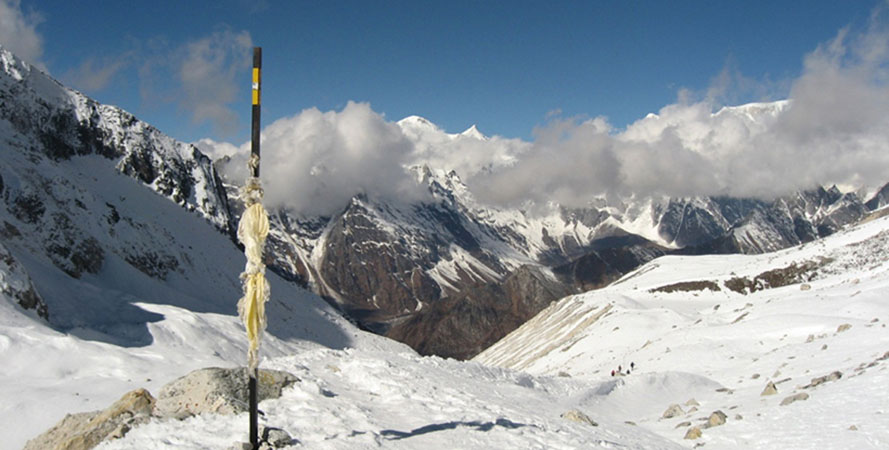 The Helambu Trek is one of the easiest treks which lies close to the Kathmandu Valley. Though not as famous as the Annapurna region or the Everest region treks, this trek promises magnificent sceneries of the glittering rivers, snow-clad mountains, and the verdant landscapes.

We begin the trek with a scenic drive to Sundarijal, which lies on the outskirts of Kathmandu. From Sundarijal, we begin our climb passing through the settlements of Gul Bhanjyang, Tharapati, Shermathang, and so on. Along the route, you get to witness magnificent landscapes and the blooming vegetation with the mountains gleaming in the backdrop.

Since the elevation of this complete trek lies between 800 and 3600m, it is a quite low-altitude trek. This makes it perfect to opt for it during February month!

Day 01: Drive From Kathmandu to Sundarijal and trek to Chisapani (2134m)

The Tamang Heritage Trail Trekking lets you witness the Buddhist-influenced Tamang Villages scattered across the alpine landscapes in the Langtang region. The trail passes through the traditional Tamang villages where you get to witness their rich cultures and conventional lifestyle.

Aside from the cultural attractions, the trek also provides magnificent views of the sloped terraced farms, the gleaming Parvati Kund Lake and the panoramic icy peaks. You also get to witness the hot natural spring of Tatopani and the traditional trade route of Tibet-Nepal which are the main highlights of this trek!

Since its recent opening in 2004, the route sees fewer tourists than other typical treks. In February, the number of tourists drops even further granting you a trekking experience in solitary comfort!

Advantages Of Trekking in Nepal in February

During February the skies are more clear, and the views are much sharper. Also, heavy snowfall in the higher elevations provides fantastic snow-capped mountain views. The temperatures are also pleasant during the day when the sun comes out.

Unlike the peak season, where even finding an average shelter is a hassle, February witnesses less flow of tourists. Thus the trails are silent with only a handful of trekkers along the way. It allows you to trek in absolute comfort and solitude.

Cheaper than other seasons

February is a heaven for budget-friendly trekkers! Everything starting from accommodation to flight prices are very cheap. You can carry a lesser budget than you would typically carry during February.

If you happen to visit Nepal during the first half of the February month, you will have the opportunity to witness the biggest festival of Hindus. On the auspicious occasion of Maha Shivaratri, devotees from all around the world flock to the holy Pashupatinath Temple to offer their prayers to the almighty lord.

Tips For Trekking In Nepal in February

Trekking in Nepal in February can be a gratifying experience if you opt for it with appropriate measures. The clear skies, snow-clad mountains, and verdant valleys can add much more vibrancy to the trek!

It is a great way to step out of your comfort zone and try something adventurous. Don’t let the wrath of the winter season pose any barriers to an unforgettable experience!